International neighbourhood "in the country"

Oyster Pond, a sheltered bay owing its name to its similarity to the shape of an oyster, is the only marina on the east coast and a symbol of the peaceful coexistence of two nations on one island. The Dutch-French border runs directly through this residential area. Thus the resort "Captain Oliver's" is truly international: the rooms are on French land, but the restaurant and the marina rest in Dutch waters, just behind the invisible borderline. 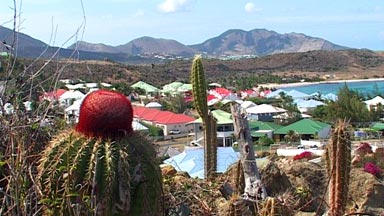 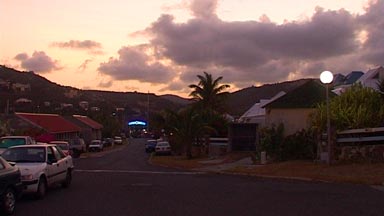 It could not be more fitting that, as legend has it, Oyster Pond supposedly was the starting point for the island's partition when a Frenchman and a Dutchman set off in different directions 350 years ago. However, the locality, which used to be derided as remote, was only developed after 1978 when young entrepreneur Captain Oliver laid the first foundation stones for his resort.

The French government put an infrastructure into place and a large amount of land was made available for purchase, but construction did not start in earnest until the late nineties. In the course of "defiscalisation" mainly hotels were built, but upon expiration they were divided up and distributed to private owners. Today many units are rented out as apartments.

Despite the presence of two resorts Oyster Pond has remained one of the prettiest places on the island and has not been opened to mass tourism or large-scale building projects yet. Residents appreciate the quiet neighbourhood "in the country", situated peacefully between roaming animals and typically Caribbean beaches. Also remarkable are the ruins of a few buildings - legacies of the hurricane Luis which destroyed 80 percent of all buildings on the island in 1995.

Olivier, owner of two restaurants in Paris, actually wanted to circumnavigate the world in 1978. However, this led him to the bay of Oyster Pond. He decided to establish a marina and a restaurant there. Neither the internal border nor the ridicule for developing such a remote spot were able to dissuade him.

The Englishwoman Elisabeth has been living on the island since 1989 and used to work in the hotel industry. Now she rents out many of the buildings in Oyster Pond. Despite her experiences with hurricans she is unable to imagine a return to life in Europe, but instead extols the quality of life between her free-ranging animals and Saint Martin's cosmopolitan characteristics.