Philipsburg, the capital of the Dutch side, was founded in 1763 by Commander John Philips, a Scotsman in Dutch service. Unlike one might expect from a town with a colonial heritage, a divided picture presents itself to the visitor. Impossible to miss is the deep water dock where ocean liners bring thousands of cruise passengers into the town, who then throng through Front Street and its line-up of jewellers, boutiques and merchants selling pretty much everything from Danish china to Japanese electronics. 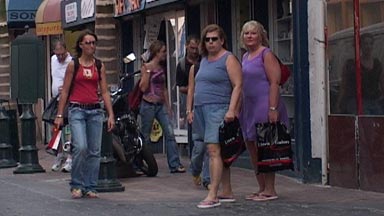 Due to their economic importance, the government naturally attempts to cater for the tourists' every need. However, this means that historical buildings are being replaced by concrete structures. Only isolated remnants stand as contemporary witnesses of the historical Sint Maarten. Empty spaces are built over, and the little historical that is still left, such as Fort Amsterdam or the former plantations, almost seems insignificant. It is not only historians who warn against the downside of this development. 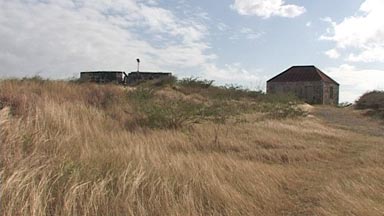 The further one gets on the narrow stretch of land towards and across the Salt Pond, besides Great Bay the other boundary of the only four blocks wide town, the more the appearance changes. The world of the tourists is gradually replaced by that of the locals. This stretches from the settlements St. Peter's and Dutch Quarter over the surrounding hills and the border into the island's interior. On the main road along the Salt Pond two sights of a slightly different kind may be found: the only traffic lights on the island.

Andrew Patrick from Statia is head of the land registry of Sint Maarten in Philipsburg. He takes pride in his finds from the archive: old books, maps and registries from the times of plantations and slavery. He fears that the current trend will lead to the traditional culture being replaced by concrete blocks.